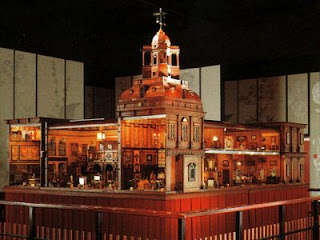 A good dolls' house becomes a priceless creation. Hours spent conceiving of its size and character turn into months and years of intricate work, careful decoration and inspired invention.

This was what happened with Titania's Palace, begun in 1907 by Sir Nevile Wilkinson who lived at Mount Merrion House. He built it for his daughters, the eldest of whom was Gwendoline. As is the way with such ventures, she and her sisters were grown up by the time he finished it. The house was constructed by the Dublin firm of furniture makers, James Hicks, while Sir Nevile did much of the decoration. It was an exquisite piece of work, magnificently furnished and constructed on a grand scale.

It was roughly contemporary with the famous dolls' house over which Queen Mary, the consort of the British King, George V presided during a very long life. Though the King died in 1936, Queen Mary was still around in the 1940s, when I was a child and knew the owner of a famous children's toy shop in Knightsbridge called Pringle's. I remember one occasion, going there and havingto stand outside because Queen Mary was visiting. I later learned she had been buying pieces of furniture for the Royal Dolls' House which was then and still is at Windsor. Queen Mary's Royal Dolls' House was designed by Edward Lutyens, the famous Edwardian architect. Much of the furniture was made by Fred Early. He was the same Dublin craftsman employed by Sir Nevile Wilkinson to create the tiny craftware for Titania's Palace.