Sir Isaac Brock died during the battle of Queenston Heights, aged 43. He was tall, standing 6 foot 2 inches, and was a commanding figure.
He is considered a Canadian hero, especially in the Niagara region. An ambitious man, he rose through the ranks from ensign at age 15 to major-general when he died. Many of his promotions were during peacetime, an unusual feat.
His elevation to a knighthood was in recognition of his role in the capture of Detroit. Sadly, he died before he knew of this promption. His legendary hat had been ordered from Britain and arrived after his death.
Here is a depiction of him before the battle, surveying the situation. 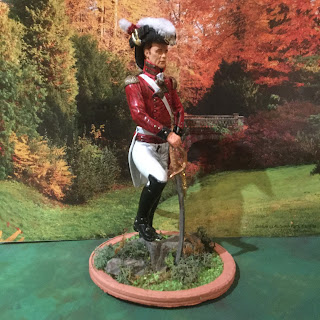 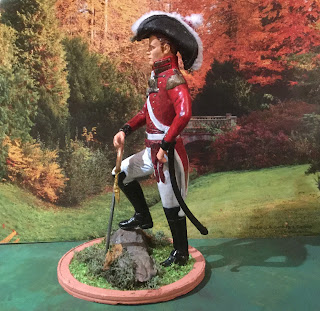 I found this figure at a garage sale, minus sword and hat. Made something for him to stand on, furnished him with a weapon from my stash, and made him a replica of his famous hat.
Posted by Little Roomer at 8:50 PM