Another participant in the Canada Minis T2T challenge issued by Barb K!
Take a look at this inventive gazebo. 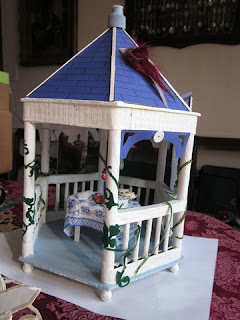 Adrian Cooper runs a T2T competition at Camp Mini Ha Ha* each year and writes:
I collect weird little bits of tat through the year, and make up identical kits, which can be picked up on the opening evening of Camp, and worked on over the 5 days. I do include a piece of foam core, and several types of mini "lumber" with those kits, as the ladies are at Camp without access to their home stashes. I am always thrilled with the different finished vignettes, so many different approaches.

Components I used for the challenge: 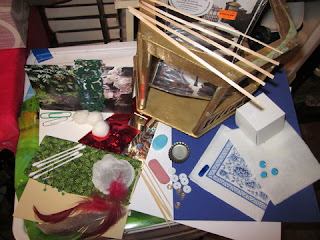 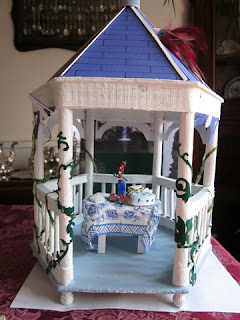 For more ideas, take a look at these blogs:
T5 Challenge - by Doreen Playter
T5 Challenge - Trash to Treasure 2012 (twenty-twelve!) by Maureen Heuchert
And of course, the trash minis pages of the Minitreasures Wiki!
"Camp Minihahha" in Nova Scotia. Maureen Heuchert has an album of pictures, also showing historic Louisburg, and Cape Breton in 2009 (see interview on Breakfast TV)

Posted by Little Roomer at 2:08 PM