One of our neighbours had a birthday and the theme of the party was Alice in Wonderland. (The Shaw Festival is featuring the musical this year.)
This is a version of the playing card painters commanded by the Queen of Hearts to paint all the white roses red.The heads are styrofoam balls cut in half, hats and cloaks are red tissue paper, brushes are made from stir sticks carved to shape and painted. Hands and boots are made with Fimo, paint pots are from card. Isn't it amazing what a couple of coats of paint can do?
The idea was inspired by a Small Packages Tutorial.
The faces were downloaded from the Internet. Cards are actual playing cards. 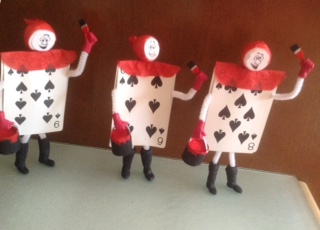 The painters looked good installed in the bushes with garlands of white roses. 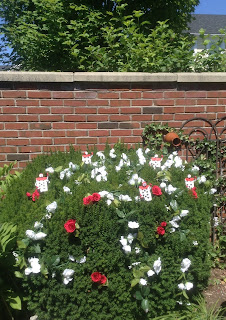 Also, the little guys were used in an Alice inspired hat worn to a garden party. 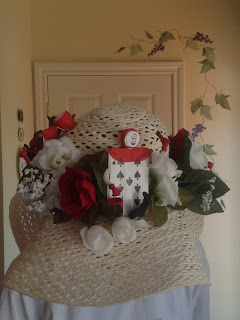 There was also a giant teacup planter. If you look VERY CLOSELY, you will see Alice and the caterpillar, as well as the Cheshire cat. 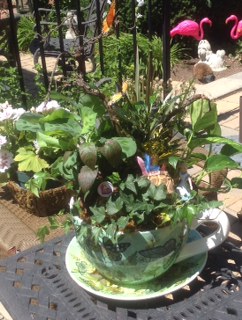 Posted by Little Roomer at 7:47 PM