Chris the CD Crusher in Canada
It was an accident! Honest!!

As for this week's T2T I have just a small one concerning CDs and DVDs. When one is smashed under a car wheel in the driveway, :-} if you look you may find little bits of the silver film sticking out from the broken edges of the clear plastic interior. When you find some, use your fingers or a pair of tweezers to GENTLY coax the film to pull away from the plastic base. It is finicky to do but the reward is worth it because you now have in your possession micro-thin pieces of full-spectrum reflective material. These can be attached anywhere you need something to reflect light with the colour depending on the angle it is viewed from. I don't know how else to put the effect in words, but if you you hold a CD disk in the light and tip it around a bit, you'll see what I mean. Thin strips can be used to outline a poster or sign and added to just about anything in a modern setting, and if glued to light-weight paper, can be punched out when dry and the shapes used as desired. Gluing some film on both sides of the paper means you can punch out shapes to use for hanging ornaments, mobiles, store displays ......... Well, you get the idea.
Posted by Little Roomer at 6:32 PM 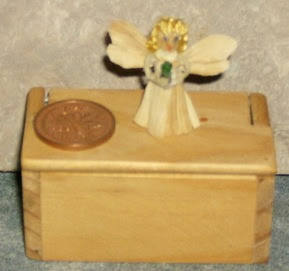 Finally the hot, humid weather has gone, so last weekend I cooked up some of our fresh Ontario corn inside, instead of on the BBQ. I was putting the husks and silks in my green bin container and thinking about how soon Christmas would be upon us and what tree decorations I would have to replace, when the light turned on. Here were the makings of more corn-husk angels to replace the ones that the cats had mangled a few years ago ...... AND why not use the same husks to make mini corn-husk angels? My original angels were just shy of 2" tall, reduced from instructions I found on-line, but they could be made any size you want by using the thinner husks found closest to the cob.

The green husks and silks are easily dried by letting them air dry in a collander or strainer for a few weeks, or they can be laid in a single layer on a paper towel, covered with another towel and micro-waved. I did mine for 2 minutes on high, let stand for about 5 minutes, them flipped them over, paper towel and all, and nuked them another 2 minutes. I then spread them out on a clean paper towel and let them sit out overnight. Voila, 'almost instant' dried corn husks for free, versus the $4-$5 craft stores charge for a 'kit' consisting of a few corn husks, a cotton ball to use for stuffing the head and some photocopied instructions, probably taken from the internet. 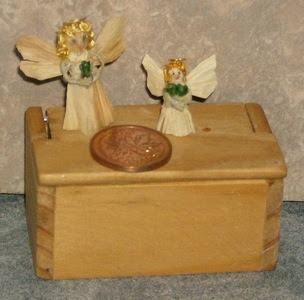 Tonight I made a "HUGE" corn husk angel (LOL!!!), a hair over 7/8" tall without her halo. I wanted to start big and work my way down to 1/2" tall so she would fit into either a 1:12 Christmas scene, or minus wings and wire halo, serve as a decoration for a country style home or a pioneer child's doll. . Her eyes ran due to the fibres of the husks so she looks as if she hasn't slept in a long time, so if I do eyes on another, I'll seal the face first. And I'll use regular bunka for the hair, or some brushed out acrylic yarn, not the stuff I snipped off from the fringed pillow beside me.

Posted by Little Roomer at 5:53 PM

Pack up your tent 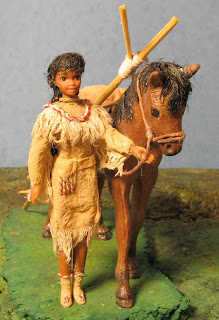 Ever think about moving, First Nations style?
Now what WOULD a girl carry with her? 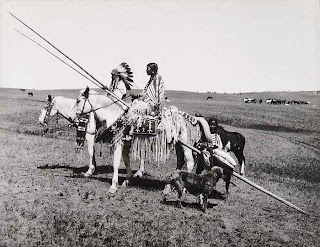 Whaddya do with the toddler not old enough to walk - make a portable playpen! 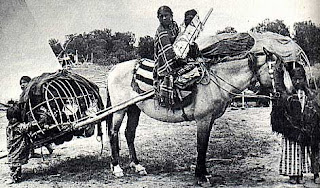