Marilyn in CT posted this in All Things Mini Yahoo Group:


My first intro to glitter houses was in the 40’s when I was a kid living in Hamilton Ontario.

I have made a 1/4” glitter house using some of the directions on the Glitter house web site. I also made some tinier ones. The cardboard can warp but to help prevent it be sure to paint or paper both sides of the card. Here are a couple pictures of ones I have made. Since you have limited space you might like to make some like I show in the third picture or the tiny house in the bigger one.

1/4” glitter house made from a Christmas card. 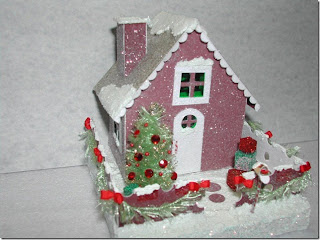 I furnished it instead of just a hole in the back for a light. Notice the tiny glitter house in the bedroom

like the big one. Had a bit of warping on one side but it can add to the charm of a hand made piece. 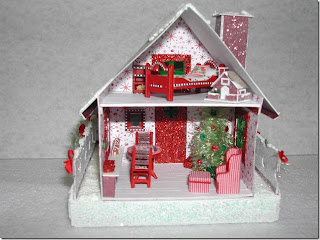 A row of tiny glitter houses that could go on a 1” scale mantle. These are made from solid wood pieces.

The fences are card. 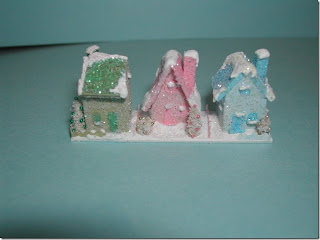 Posted by Little Roomer at 4:14 PM

Here is Chris in Canada again with a brilliant idea that makes use of two throwaways at once!
She says:
While playing with my new heat gun a few years ago, I inadvertently managed to fuse the cap onto a nearby hard plastic rice vinegar bottle, as well as cause the side closest to the heat gun to bulge out in the middle, when I left the gun running while I applied some embossing powder to a project. This goof did result in an interesting rice vinegar bottle, but the scale was all wrong. :-D As a result of this incident I started playing around with bits of plastic stuff to see what would soften and melt rather than catch fire. (Not to worry, I did this on a ceramic tile placed on a firebrick placed directly under the stove's exhaust fan, and no toxic fumes were harmed during testing.)

Anyway, one item in particular took nearly 2 minutes to completely liquefy, giving me a range of useful consistencies from just soft enough to dent with a toothpick, to bendable, to stretchable then finally a thick goop that can be pulled out to form delicate peaks and swirls. This 'miracle material' was some clear Dollar Store push pins that had kept cracking when I pushed them into something hard, leaving just a naked metal stub behind to stab the unwary. I then tested 2-3 brand name clear pins, and they produced the same results, only a bit faster. Sadly, the coloured plastic pins I had just suddenly melted into a shapeless lump that would not re-soften. :-(

The melted and shaped clear plastic is crystal clear except for teensy bubbles that may occur when pulling out thin rods, but shortly realised that one can only use so much modern crystal! So I dug out a little tray of water-based glass stain paints from (where else?) a Dollar Store. I couldn't recall when I had bought it, but it must have been some time ago, as the paints had petrified in the still-sealed containers. Adding a few drops of water and leaving that overnight made no difference. Then I gave the closed containers an 8 second nuke in the microwave (resulting in a very thick goop), added more water drop by drop, stirred and nuked again until it was the consistency of craft paint. This restored glass stain paint was applied lightly to the push-pin glass and then each piece was given a blast from the heat gun to force the stain into the softened surface of the plastic.
NOTE: I now have the tray of restored stains in my freezer, triple-wrapped tightly with Stretch-n-Seal, in a zippered baggie with all the air I could find forced out. I've done the same for safe-keeping some unopened 'Plaid' brand glazes in small bottles that I bought on clearance a few years back but are still liquid (a better seal??). 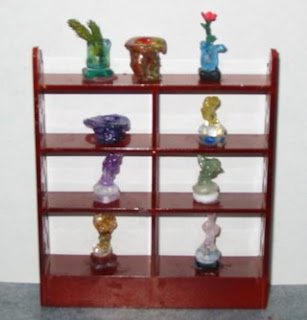 Some of the early results of the Great HS Artglass Experiment of 2011. These "Abstract Art Glass" pieces are half-scale (1:24) so the two largest pieces were made with about 1.5 pins worth of plastic mixed together as it softened, but the rest involve only 1 pin, or less if the cracked-off bits escaped to the wilds of the carpet below the table. I'm not done experimenting yet, but if you heat a mixed pile of small scraps until very soft and sticky, quickly mash them together (I use the end of a dowel) and heat a bit more, they will blend together and then can be formed as one into what you want.
Posted by Little Roomer at 4:14 PM

How I did it:
If you want precise step by step measurements and directions here FUGETTABOUTIT! But here is a fly-by the seat of your pants tut.
Materials :
Step 1: 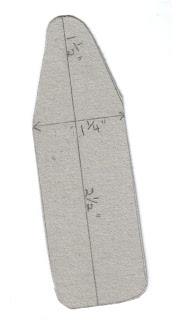 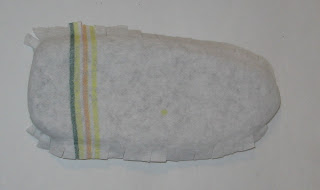 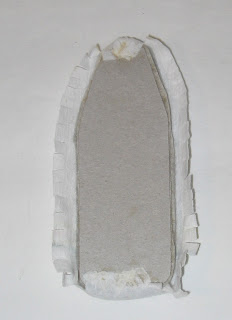 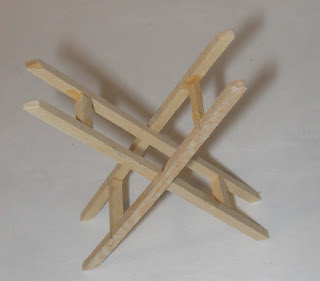 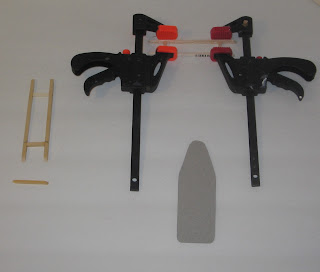 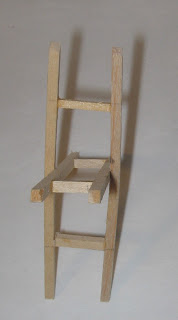 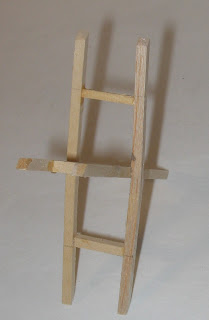 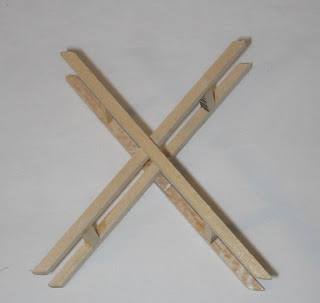 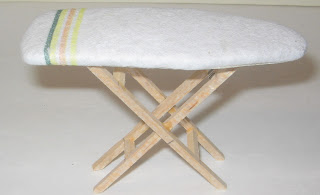 Posted by Little Roomer at 5:30 PM

Keep your lid on! 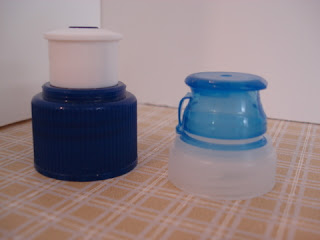 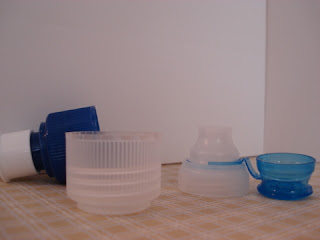 Planter and Bowl on a plate

Marjorie in California writes:
If you look at water bottle tops carefully, you will find a wealth of uses. I've posted pics of two different types; one that comes in blue or white and is a push up. Another that is a flip over type.

On the push up one, I had my hubby cut off the lower section, making a beautiful planter in one inch scale. On the flip on, the part that flips over is the bowl on a plate. This could be used in multi scales depending on what you wanted to do with it.