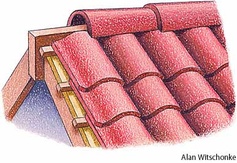 Chris Shibata wrote:
After trying (rather unsuccessfully) to make individual pan tiles for a tiled roof from air-dry clay in 1:24, I noticed that the corrugated protective layer from a produce tray (in this case it was grapes) had ridges with the right spacing between bumps for pan tiles in 1:24 scale. I checked my stash and the pieces of corrugated card used in tins of imported cookies matched 1:48 scale, and although not trash, but almost as cheap, the 8"X10" sheets of corrugated cardboard sold in dollar stores in packs of 3, were just a hair bigger than 144th scale. A few weeks earlier I had put a box and the packing from a floor lamp out for recycling, and now recall that those bumps were larger than the grape packaging, and probably would have been in scale for 1:12. :-(

NOW, the best part!!!! No more one by one roof tile application. :-D Here's how:

1) First paint the bumpy side of your corrugated sheet with a clay colour like brick red or dark grey. When that's dry, use a soft lead pencil to make a smudgy line down the middle of each groove in the paper. Don't worry about it being even because it is just a shadow effect to make the finished tiles look as if they are individual units. OPTIONAL: At this point seal the sheet with a matte spray finish. This makes it easier to remove bloopers.

2) Now you can dry brush or sponge on any combination of colours like dark brown, medium brown, burnt sienna, grey or black to add some variations in colour to the ridges. Don't put too much on now, because you will be adding more colour once the tiles are on the roof to indicate areas where grime has collected and so on. At this point you should seal the sheet ON BOTH SIDES with a matte spray finish or a thin coat of a brush-on matte sealer of any sort. I used ModPodge for the back, and Delta Ceramcoat for the front, but those just happened to be the ones closest to where I was sitting. The idea here is to add stability to the ridges so they won't mush down if you squeeze them by mistake. Been there and done that. :-(

3) When everything is dry, turn the sheet over and using a ruler, lightly mark lines across the paper (across the ridges on the front, NOT along the grooves) so that when the strip is cut there will be a strip of bumps and grooves. A real size pan tile measures approx. 14" long so the lines for 1:12 tiles should be placed about 1 1/4" apart, for 1:24 about 5/8", for 1/48 about 5/16" and for 1/144th, anything between 1/8" and 1/4". These lines do not have to be exactly on spot since you will be spacing the rows of tiles exactly as you glue them on. Using SHARP scissors, cut the sheet into strips. Don't try to use a craft knife. It won't work, even with the sealers applied. (See last sentence of step 2 above.) Run a coloured pencil or marker along one long edge of each strip to hide the raw edge.

4) Use these strips just as you would the shingles that come in strips, starting with a row along the eaves, except you will be placing the second row with the bumps overlapping the bumps on the first row, unlike the staggered rows used for shingles and flat tiles. I found it easier to make a template of the roof area to be covered on plain paper, glue the tiles to the paper then test fit before the whole sheet is glued to the roof. Ridge tiles can be made with lengths of painted drinking straws cut to fit. Add any additional aging effects you want and (again) seal the whole thing with any matte finish on hand.