This year in the Niagara Region, both north and south of the border, marks the Bicentennial for the war of 1812-14.

The International Boundary which divides the United States and Canada is the longest international border in the world shared by the same countries. The War of 1812 was the last time there was conflict between the two nations. The Americans burned Niagara on the Lake and the Canadians  returned the favour and burned the White House! Both sides believe they won. And in a way they did, because the Bicentennial celebrates 200 years of peace between our two nations.

The Battle of Queenston Heights was the first major battle of the war, and resulted in the death of the hero of Upper Canada , Sir Isaac Brock..
following picture from Barbara Martin Here is a picture of Brock  on his horse, Alfred. from War of 1812 War Prints One of the artifacts in the NOTL museum is the hat Brock ordered from England and which did not arrive until after his death at the Battle of Queenston Heights. 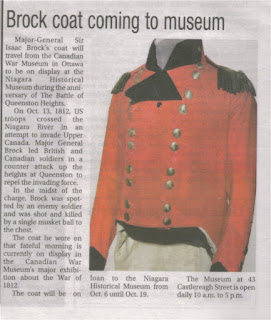 This is a representation of Brock's hat and that of the preacher who conducted the burial service. 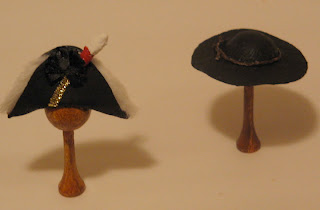