Take a look at the unique project Chris from All Things Mini has created! The basic plan for the structure has been uploaded to the club so members can make up their own "room and a half'. 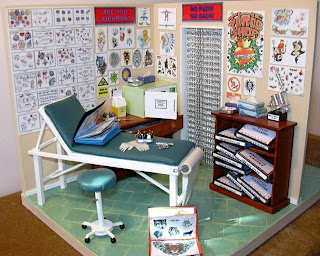 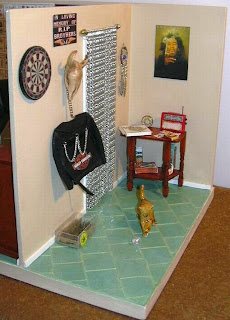 She said: These 2 give a fair representation of the whole thing. I actually won an online competition with this some years ago and these were the 2 photos submitted.
what gave you the idea for the project?
DH and I used to have a ceramic studio. In the early 90's part of our income came from attending tattoo conventions where we sold ceramic fighures that we made such as Native Americans, Wizards, Dragons etc. So, I got to know quite a bit about a tattooists setup. I had never since this theme before or since and so was inspired by the almost unique theme. It was my first full size project.
did you make all the items from sctatch?
Absolutely everything is made from scratch. Every page of every album is filled with tattoo artwork known as 'flash'.
which item is your pride and joy?
The whole scene because it was my very first full project. But, particularly the medical couch and stool. DH drew up the plans for these after studying lots of online photos. The stool can be raised and lowered by means of a screw.
I would eventually like to try to recreate this in smaller scales but it is something that will have to be put off until I retire.
Regards,
Chris
Posted by Little Roomer at 4:10 PM