Tina Macdonald from the Canada Minis group posted this brilliant idea as part of their T2T challenge 2010. 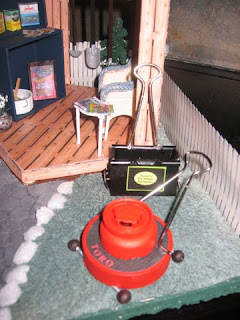 Here is a new (I think) idea for binder clips. Most of one clip became the fertilizer spreader with the addition of two chunks of coffee stirrer to keep it open, two thumb tacks for wheels (extended with black paper disks, and a little printie with the manufacturer name. Scott really does make these things!

The remaining side of the clip became the handle for the lawnmower, with the addition of three bottle caps, four small wooden beads and two toothpicks for axles, and of course, the name of the manufacturer!
Posted by Little Roomer at 11:26 AM